Our business has been operating in sub tropical Queensland for over 20 years. During that time we have been represented  on the shelves of all of Australia’s supermarket and hardware chains including Coles, Woolworths, Metcash, IGA, Franklins Bunnings, Masters, Mitre 10 and many other stores.

We are a an Australian owned family company who believe in a sustainable and regulated management of the environment and all of the products that we deal with. We are pro green and come from a history of rural and farming backgrounds.

All of our products have achieved apvma (Australian Pesticide and Veterinary Medical Association) and other appropriate regulatory approvals and have been through the rigorous trials for efficacy and toxicology that are required to gain approval. The appropriate (Material) Safety Data Sheets are attached to this website. 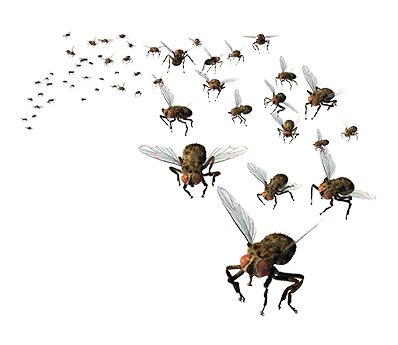 In recent years many of Australia’s, and the World’s, Shire and City Councils have, for ease of handling, changed their rubbish management systems from garbage tins to Mobile Garbage Bins or “Wheelie Bins”

Unfortunately the wheelie bin is probably the best thing that has ever happened to the breeding cycle of the common house fly (Musca Domestica). The bin provides a secure, warm, dark environment full of moist food, an ideal “humidicrib” in which the female fly can place its eggs. The fly will lay its eggs within minutes of entering the bin.

As a result most areas record a large increase in flies after the installation of wheelie bins.

The fact that the bins are cleared once a week is also a bonus for the larvae as they are able to (in their safe humidicrib) feed and mature to the next stage of growth and strength. The flies then mature and the breeding process begins once again.

Many flies breed in the bin as a result of eggs that were laid inside the kitchen bin maturing on reaching the Garbage bin.

Flies and insects are carriers of typhoid, tuberculosis, conjunctivitis, dysentery, hepatitis etc. Their life span is between two and four weeks.

They are also a huge nuisance to human beings and are equated with uncleanliness and filth. In the past mankind has used a number of products to rid themselves of the house fly, blow fly and other “Order Diptera” insects.

Due to the residual toxicity of these products and peoples awareness of the planet on which they live, many of the powerful insecticides used in the past are now at the least avoided and in many cases banned by regulatory authorities. Others such as sprays have proven ineffective and uneconomical methods of ridding Mobile Garbage Bins of flies.

The Binkill will break the breeding cycle in the Wheelie Bin and change the bin from being a fly breeding entre to a fly killing centre.

An insecticide is combined with slow release and knockout chemicals plus a deodorant, in a tamper proof container and is attached to the inside of the wheelie bin.

The convection which takes place in the bin as the sun moves and the temperature of the day changes plus the slow release vapor ingredient, will cause the powerful but safe insecticide to kill the fly when it enters the bin. Our testing with the Northern Territory Department of Health Entomology section has shown a 100% knockdown of flies and maggots. (Flies 20 minutes, maggots five hours).

The Binkill tablets are environmentally safe and have a thoroughly tested record as a fly and maggot killer and a deodorant.

The tablet will break the breeding cycle, cause flies, insects and maggots to perish, therefore eliminating the Wheelie Bin as an almost ideal nursery for flies. It will also greatly reduce the smell generated by Wheelie Bins.

The product is protected by a hedge of patents and patent applications which cover the container, the attachment device and the chemical.

Each Binkill will last 12 weeks.